Buy this product and earn
53 Credits
How can I use my Credits?

Fingerpicked Guitars is a combination of two guitar recordings.

The aim is to obtain a vivid fingerpicking sound suitable for americana, celtic and film music etc.

The new range of instruments from Marcos Ciscar aims to capture beautiful instruments with the best recording techniques in a professional studio environment. The recordings are clean, transparent and musical.

NOTE: The FULL version of Kontakt 5.8.1 is required - NOT for Kontakt Player

To celebrate the three year anniversary of my first release "Fingerpicked Guitars", here comes a fresh makeover of it.

This product is compatible with Kontakt Full V5.8 or later

Reverb
Here you can add ambience to the sound. Hipass cuts the low end out of the sound, Size controls the decay of the reverb and Return the amount of reverb volume in the mix.

Filter
This is a classic low-pass filter that cuts the high frequencies out. Cutoff sets the frequency and Resonance the amount of feedback in the filtered sound.

Main controls
Here you adjust the Volume and stereo placement of the sound, Pan.

Flanger
This is an emulation of the vintage ‘anger’ eect that was originally produced by letting two reel-to-reel tape machines with the same recording run together while touching the reels, thus altering the sound. The controls are Depth (amount of the FX), Speed and Feedback which explain themselves.

Chorus
This creates thicker sound through the use of detuning techniques. Speed set the vibrato of the FX and Depth the amount. 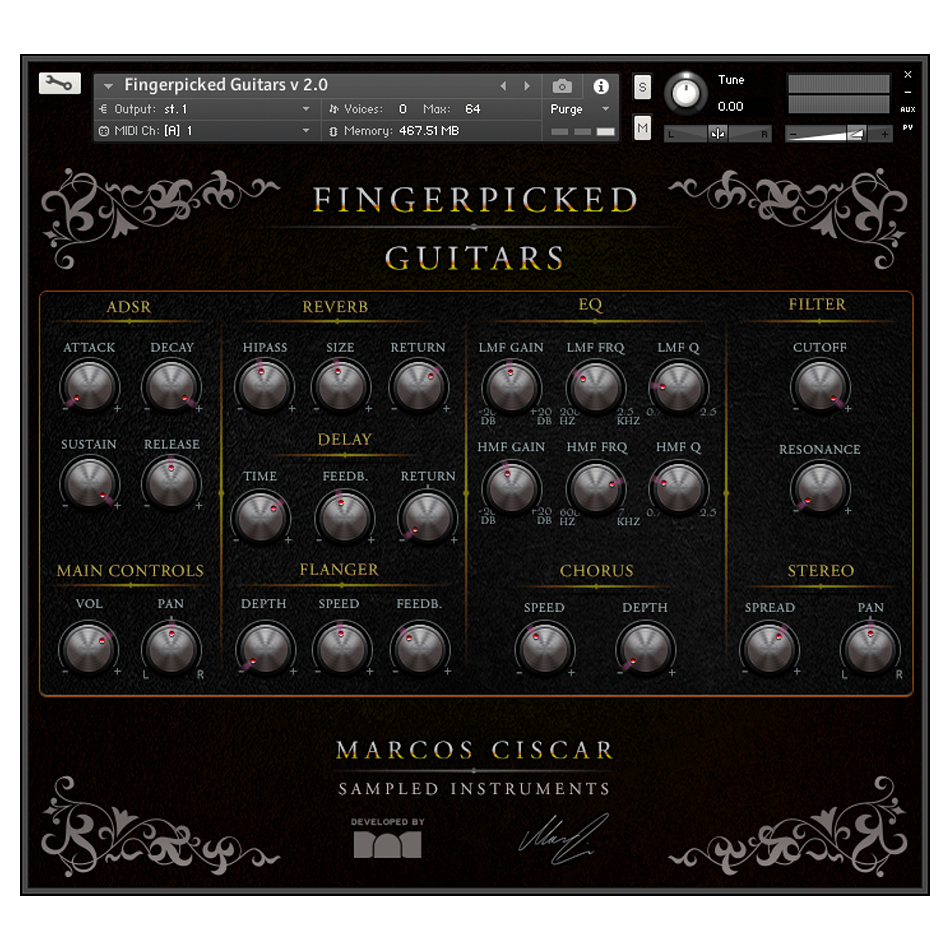 Lovely sounding acoustic guitar with fret sounds at a very reasonable price, excellent set of effects to tweak to the sound you want, look forward to more instruments from Marcos Ciscar

another top quality instrument from this developer!

Even though there are larger guitar libraries for Kontakt this one sounds really good and has also a nice price tag.

Really nice, authentic sounding finger picked guitars. Easy interface. As a guitarist, I never thought I'd use a sampler for acoustic guitars. But this one gets the job done. Excellent.

Excellent as all of Marcos' instruments especially for the price points. This man knows what he's doing! Keep up great work!

12 major and minor chords plus percussive and fret noises