Atom Hub’s array of Kontakt Instruments is a stunning collection of addictive ear candy, that has just the right instrument for almost any production.

The versatility of their instruments is impressive, just a single patch can be tweaked and altered to create an almost infinite number of outstanding sounds. Don’t let this intimidate you however, their libraries are some of the best I’ve ever gotten my hands on. With this in mind, which ones are worth investing in the most?

Here is, in my view, an exploration of the five best Atom Hub Kontakt libraries currently available. 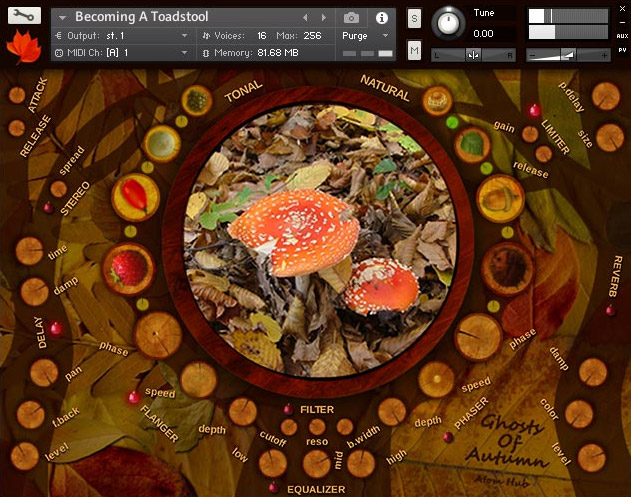 Going into this, I was a little skeptical, to say the least. The interface immediately appears cluttered and chaotic, the text is rotated in unnatural ways and it’s unclear what knobs do what. With that said, I’m happy I pushed through this minor inconvenience, as the sounds that this library can produce are unparalleled. On the surface, it’s an organic pads and synth instrument, but it’s so much more. It’s impossible not to get a rich, dense sound out of this library. This is down to the fact that it uses “8 layers [per note] loaded with picturesque autumnal sound samples”. Its parameters are enticing to play with, you’ll always come out with a sound completely different to the preset you started with, yet it’ll sound equally remarkable.

The layered background sounds are highly tactile and give your ears something to latch onto. On top of this, playing Foley sounds underneath chords is not something I’ve ever considered trying before, especially not with a synth flute — the ability to invoke inspiration is a key attribute of this pack. Enabling chords to roll into each other in synths like the “Life-Giving Spring” preset, creates thick, almost orchestral-like soundscapes, that would be cumbersome to recreate using just synth plugin layers.

Overall, this library offers a soothing collection of natural synth pad sounds, alongside a good selection of Foley samples, perfect for any ambient music or instrumental piece.

This extraterrestrial library is perhaps the second most versatile Atom Hub library (more on that later); The Planet is more than capable of creating retro-sounding, Frank Ocean-Esque synths, futuristic glitch instruments, and everything in between. Featuring the unfamiliarity of glitch, mixed with the nostalgia hit of smooth pads, it’s never been easier to craft complex, yet soothing synth patches. I found that playing various major seventh and jazz chords with this library can create a great, mysterious sound, with a little tension added in for good measure.

Much as is with various Atom Hub libraries, part of the fun of this pack is the mystery in it’s naming scheme. Patches are split into “The Planet” and “The Ship” folders, depending on whether they strike the feeling of an innate, subdued sound, or an electronic, mechanical sound, respectively. Although you don’t entirely know what you’re going to get when auditioning patches, it’s all part of this library’s charm and genuinely makes you feel as though you are discovering something new, much like an astronaut exploring a planet.

The only criticism of this pack would be concerning its GUI. Despite being leagues ahead of the “Ghosts of Autumn” GUI, the text is still too small and a tad difficult to read. Though once you’ve adjusted to this small flaw, I can guarantee you’ll be having a blast using this library. 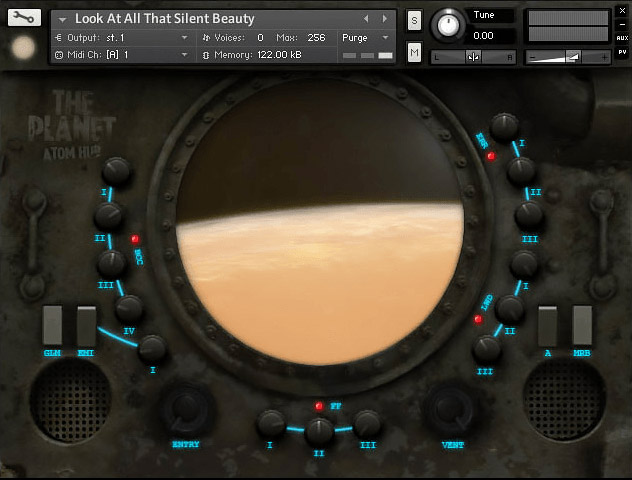 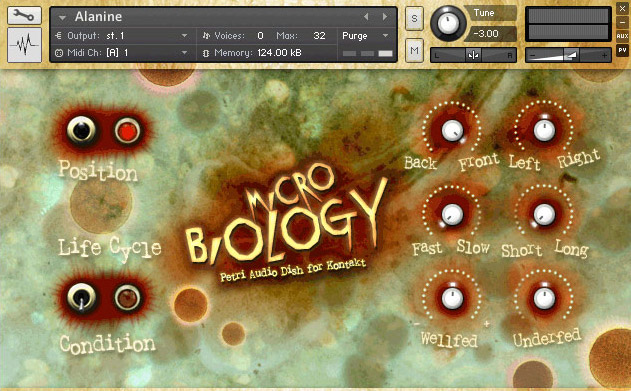 Following on from my earlier comment, “Microbiology” is Atom Hub’s most versatile and interesting library yet. Sounds range from outright glitchy, messy and almost unmusical sound effects, to vibrant and colourful synth pads. The alluring folder names make a return in this pack as patches are separated into collections of “Amino Acids”, “Bacteria”, “Enzymes” and “Viruses” — each with their own, unique sonic character. The patches themselves are derived from real chemical compounds, bacteria, and diseases. Which, while not giving the most accurate description of the patch, is an amusing and creative way to depict sounds — making each rather tempting to try.

For example, “Viruses” tend to have much sharper and shorter stab-like sounds, while “Bacteria” are much more organic and bubbly. To pair with its strange patch names, “Microbiology” houses equally perplexing parameter controls. Knobs with labels such as, “Genes Affected”, “Protein Nervosity” and “Dehydration” are pleading to be messed with, a great quality to spark inspiration, featured alongside a straightforward and pretty GUI to match.

One could argue that this is Atom Hub’s finest library for inducing creativity. Its versatility allows for its use in anything from glitch music to modern bedroom pop and lo-fi.

Contrary to what you may believe at first glance, due to its daunting looks, this is one of Atom Hub’s most intuitive libraries to use. At its core, “The Grand Mechaniano” features an ingenious “Three-layer concept” — one base layer of piano and two “Mechanic Element” layers, all of which can be panned and tuned to your liking. These two extra layers can turn an otherwise ordinary piano into a tactile, engaging, yet still natural-sounding instrument.

Presets like “Frozen And Squeaky” sound like a soft, intimate felt piano, paired with metallic squeaks and screeches, making for a lonesome, somber patch that would be difficult to replicate in any other way, let alone come up with from scratch. Applying reverb completes the sense of a lonely, aging piano, surrounded by declining metallic structures.

“The Grand Mechaniano” has quickly become my go-to piano library for lo-fi production. It feels like this library was created with vinyl crackle and background rain ambiance in mind. Combine this with a touch of retro vibrato wow or flutter and the full effect is sold. Furthermore, the library’s “Three-layer concept” and “Mechanic Element” mixing feature, doesn’t solely have to be used for layering mechanical sound effects. It can also be used to layer rustic sounding drums or instruments like flutes with long releases. Hence, giving the possibility of creating a distinctive piano, with percussive undertones, or expressive atmospheres with ease. As far as lo-fi piano libraries go, this one just about has it all. 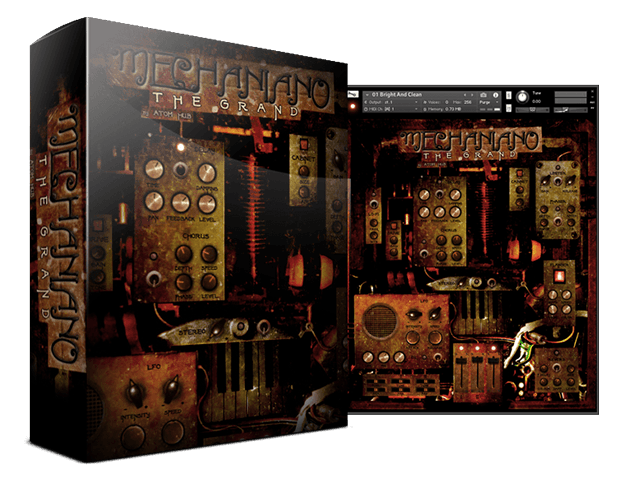 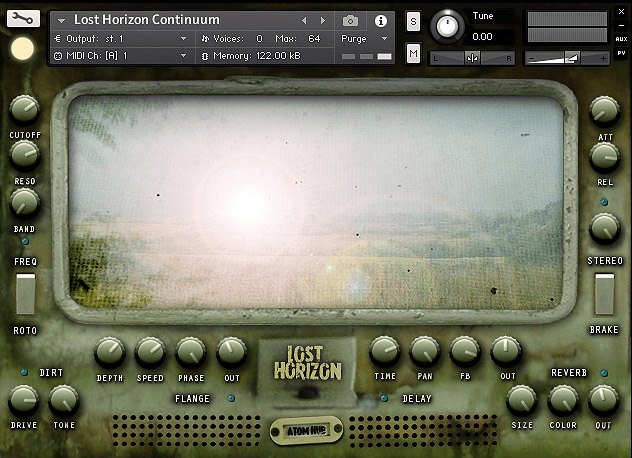 Right from the get-go, I gelled well with “Lost Horizon” — I found myself using this pack much longer than the other Atom Hub libraries. It’s easy to get lost in its warm, rich keys and synth-like patches, all of which create a profound impression of loneliness and contemplation. I primarily found myself playing melancholy major seventh chord progressions and somewhat ‘sinking’ into the bleak, yet welcoming and comforting feeling.

The library’s GUI is the best I’ve seen from the Atom Hub libraries, the apocalyptic look accompanies the solemn feeling of the patches. Effects like overdrive distortion, labeled “Dirt”, flangers, delays, and reverbs are all readily available at the click of a button. Although, I do wish it had chorus effect controls built into the interface, as I found that throwing a chorus plugin onto a bunch of these patches made them shine much more than the flanger or delay effects could — which take up the majority of the effects interface.

Albeit, not as versatile as a number of the previous libraries, “Lost Horizon” is consistent in its quality, there isn’t a single patch that I disliked or skipped over. The minuscule CPU usage is also a nice bonus for an already compelling library. I have a strong feeling that getting lost in “Lost Horizon” will become a common occurrence in my future production sessions.

This article was written by Ross Castledine - August 2020

Keep up to date with the latest product releases, offers and industry news, straight to your inbox every week.

Loot Audio has partnered with top producers and developers. Earn Credits and use them for money off your orders or exchange them for Sample Credits.