Buy this product and earn
126 Credits
How can I use my Credits?

This product is compatible with Kontakt Full V5.5 or later

We created Koto Nation out of a desire to see traditional Japanese instruments receive a deep, thorough sampling treatment, much like our acclaimed North Indian sample library Sitar Nation. While there are a handful of libraries which include samples of the koto and shamisen, they feature only the most basic articulations and few (if any) velocities or round robins. To our knowledge, the bass koto has never been sampled at all! Given the popularity of the shakuhachi and taiko in many Western film soundtracks, we wanted to allow film composers, hobbyist producers, ethnomusicologists, anime fans and everyone in between access to these classic instruments and complete the repertoire of traditional Japanese sounds available.

This library includes a massive number of samples spanning a wide variety of both traditional and extended playing techniques all recorded by koto legend Masayo Ishigure (Memoirs of a Geisha). This includes close and stereo room mic positions! A total of 25 main patches spread among the three instruments cover all crucial playing techniques, such as sustained picks with a plectrum, pizzicato, octaves, glissandi of multiple types and speeds, vibrato, tremolo, mordents (pitch bends), and mutes, as well as extended techniques such as atonal glissandi, finger scrapes, string hits and hard plucks.

Multiple dynamic and round robin layers were recorded for each articulation, as well as variations in speed or tonality where appropriate; for example, the koto tremolo can be played at two main speeds (with fine speed control), mordents can be set to whole-tone or half-tone, glissandi can be played slow, fast and in ascending, descending or mixed order, and so on. This incredible depth of sampling allows for unparalleled realism, allowing the instruments to stand alone in a solo context as well as in a larger composition. 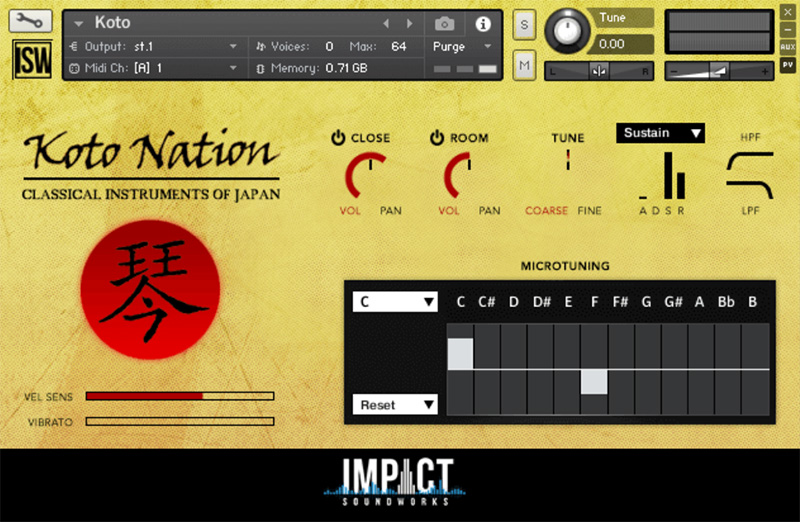 Koto
The national instrument of Japan, and one of the oldest stringed instruments in the world! The koto has 13 strings with an equal number of movable bridges allowing the player to adjust tuning, something that is often called for in pieces. It is traditionally played using three finger picks used to pluck the strings, but a variety of other techniques have developed as well such as finger tapping, harmonics, pizzicato, etc.

Bass Koto
Developed in the early 20th century, the bass koto is a much larger version of the standard koto which adds 4 additional strings and allows for much lower pitches to be played. Its deep, warm sound and large range has made it popular in some forms of Japanese traditional music as well as contemporary music.

Shamisen
Like the koto, this three-stringed developed centuries ago and became an integral part of Japanese music, perhaps most associated with its role in traditional theater where it is still used. It is typically played with a large plectrum, and can be played solo, used to accompany singing or other instruments. Many playing styles have evolved over the years - we recorded a shamisen constructed and performed in the classical jiuta style, as opposed to the tsugaru style typically used in rock or pop music.

Special FX
Also included in the Koto Nation library is a set of 9 "FX" patches, which apply online and offline processing to the core audio to take it in new, musically interesting directions. These sounds range from granular pad textures to warm sustains, drones, airy resonances, percussive hits, distorted synths and eerie ambiances. 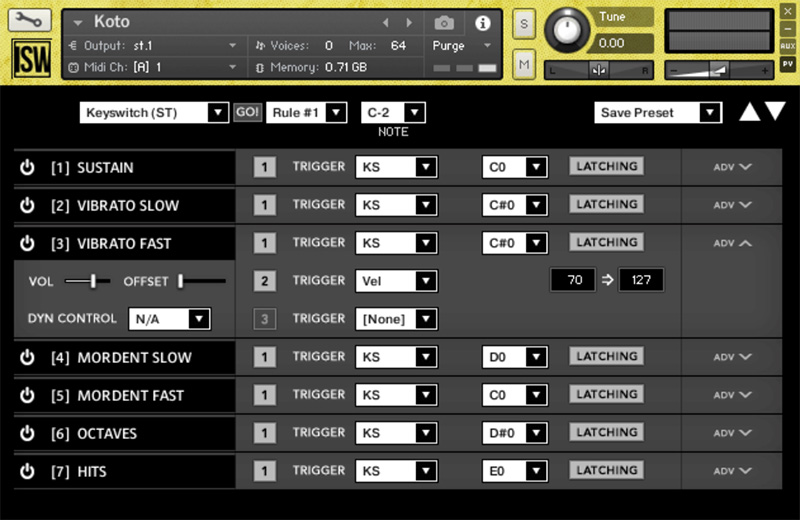 An all-in-one symphonic library that makes it easier than ever to bring your orchestral ideas to life!

An ethereal and evocative collection of vocal phrases.

Shreddage Drums offers an arsenal of heavy-hitting, radio-ready drum sounds for your tracks.

With 50 instruments, 100+ articulations, and 21+ gigabytes of raw recordings, calling this collection ‘comprehensive’ is an understatement.