Buy this product and earn
126 Credits
How can I use my Credits?

ReForged: Cinematic Metallic Sound Design, our third virtual instrument focusing on unique, hybrid sounds for modern film, TV, and game composer. Recorded and produced by sound designer Ali Lacey, ReForged explores the world of forgotten metals captured in a shed within the quiet countryside of South Wales... and as the name suggests, transforms them into something entirely new.

Cutting-edge sound designer and producer Histibe contributed his talents, co-producing a huge array of warped, shifted, morphed and mutated material for the library, among other guest designers.

ReForged features an array of found metal objects performed as if they were percussive instruments: an old cooker, metal shovels, rakes, a tin bath, gas canisters, and much more. These unique objects were hammered, struck, tapped, and resonated using a wide variety of both conventional and not-so-conventional techniques. From this pool of beautifully-captured natural recordings, we crafted a new collection of designed material – cinematic impacts, sweeps, noises, rhythmic loops, glitches, sub strikes, tonal atmospheres, dark textures, and beyond.

To tie the natural and designed worlds of ReForged together, we have presented the library as a complete WAV collection (nearly 2,000 sounds) and a set of Kontakt patches with a sleek, modern sound engine. From subtle tweaks to dramatic alterations, the interface of ReForged: Cinematic Metallic Sound Design will provide you with endless variation and inspiration for your compositions.

This product is compatible with Kontakt Full V5.0.1 or later

The ReForged interface contains a plethora of controllable parameters, effects units, and a simple but powerful step sequencer. With all of these tools at your disposal in a sleek one page layout, you'll quickly become lost in shaping sounds with as much detail and control as you desire. For those on a deadline, without time for fine tuning, the "out-of-box" sound of ReForged is just as heavy hitting and full of life. 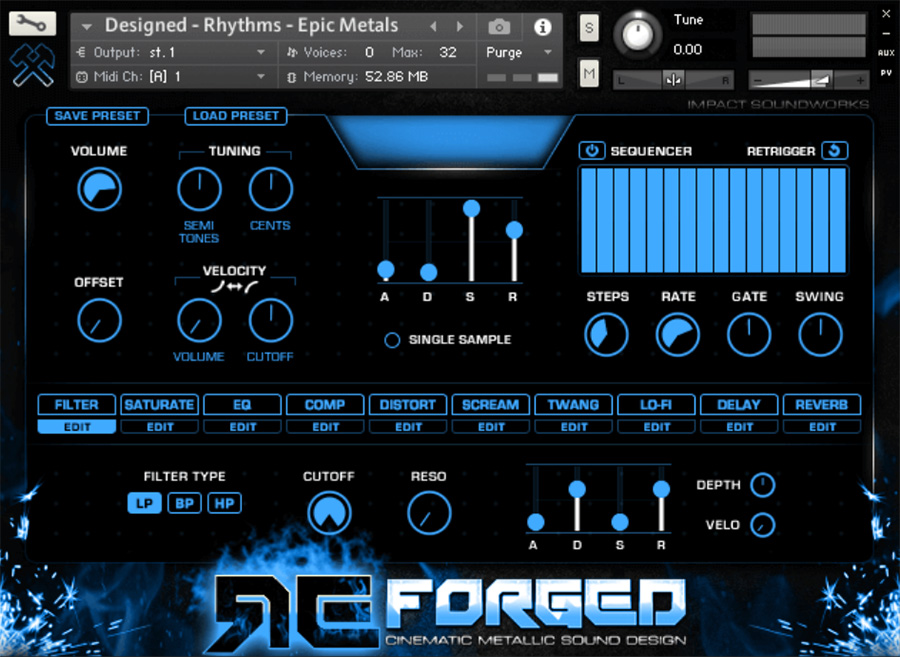 A trio of plucked folk instruments from America and Europe with a light, airy tone and our signature deep sampling!

Relive an era of classic drum sounds where funk was king!

An intricate, detailed Kontakt sample library featuring the authentic and beautiful sound of the Chinese Guzheng!