Buy this product and earn
87 Credits
How can I use my Credits?

This product is compatible with Kontakt Full V5.8 or later

BOWED GLASS CLOUDS is a cinematic morphing pad instrument running in Kontakt 5.8 and above. It is based on recordings of bowed resonant glass bowls and jars, as well as a few selected sound design sources including a household hoover, and an Ebow-driven resonator guitar.

BOWED GLASS CLOUDS makes use of Kontakt’s AET Filter technology to seamlessly morph between layers of sound, both tonal and non-tonal. The instrument has a simple GUI allowing for controls for the morphing within each layer (A and B) as well as adjustment of balance between these layers. Other controls include distortion, BP filter, delay and reverb as well as three-band parametric EQ. 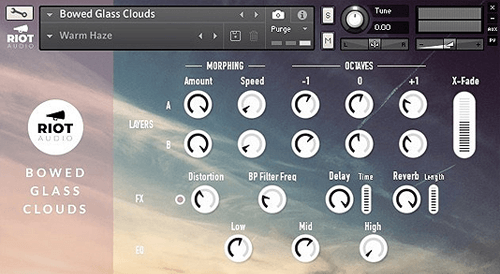 Much of the appeal of our CLOUDS engine derives from how it generates movement between different sample sources and groups. It contains two layers, A and B, each of which in turn contains a base sublayer and a target sublayer, i.e. four layers in total.

Controls gain of low, mid and high bands of a parametric EQ. The EQs have wide Qs for a musical, soft attenuation or enhancement effect.

A unique twist on a timeless classic