Buy this product and earn
165 Credits
How can I use my Credits?

Read Reviews
Pattern Strings offers a unique approach to ostinatos by providing a collection of tempo-synced rhythmic fragments.
These 19 rhythms have been recorded at two dynamic layers on violin, viola, cello, and bass, with 4 round robins.
The interface utilizes an intuitive drag and drop mechanic which allows you to arrange the rhythms into sequences in which all the rhythms flow together with natural phrasing and musicality.
Updated to V2.1 (15.02.2021) - With legato turned off, samples were delayed. Fixed now.
Updated the V2.2 (25.02.2021):

You can Drag and Drop rhythms in the center to either of the pattern strips. If you want to change the order of the rhythms you can do that too, by dragging them around.

With Legato turned on, new notes start sync-ed with previous held notes. This way it's possible to create convincing lines by changing notes according to the rhythms, as seen in the demos.

Pattern Strings has an Automatic Bow Direction feature. It plays downbow samples on downbeats and upbow samples on upbeats, which creates a natural ebb and flow between beats.

The Tempo Sync switch allows you to set the sample playback to half speed or double speed.
Some of the samples were recorded at 90bpm, and others at 80bpm. So, let's say you're working at 160bpm. This would mean that the 90bpm samples would be time stretched to twice their original speed! To make up for this, you could use the Tempo Sync option to set the speed to be half as fast.

All the combinations of instruments have been rendered down, both single and with stereo doubling. This makes it possible to layer instruments together without so much memory and cpu.

Because Pattern Strings contains 8.32GB of samples, the interface was designed with a Dynamic Loading system so that it only loads what you need. In order to make it more efficient, combinations of instruments have been rendered together, saving on voice count and memory. This way if all instruments are enabled, it will use the same amount of memory and CPU as if only one instrument was enabled.

Beef up the sound of an instrument by turning on Doubling. Stereo-doubled samples have been rendered down, so turning this on won't increase the number of voices or memory needed.

Say you're using Pattern Strings on a track, and you have a couple of different variations you want to use at different parts of the track. Rather than opening up multiple instances, you could save variations into Custom Keyswitches.
Just click “Map”, then click on one of the colored keys at the very bottom of the keyboard, and Voilà, the current pattern can now be recalled by that key!

Generate a sequence of rhythms using the Random Button, and perhaps you will find something useful. 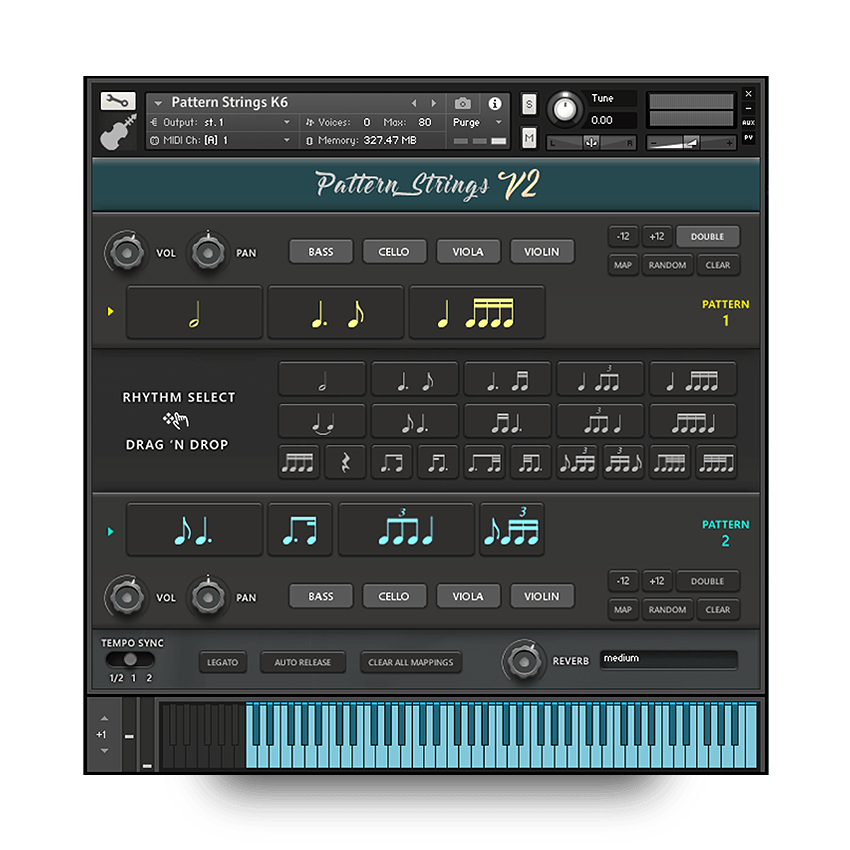 Works with Kontakt 5.8.1 and Kontakt 6 - Full versions only - not for Kontakt Player

Professional und good to use

Very sophisticated and intelligent virtual instrument. Congratulations for this work!

Ben makes some of the best boutique libraries, extremely well priced, unique and useful. Think of sonokenitic but with a bit more control over every note and more options with rhythms. A++

Very inspiring and practical, easy to use. The different rhythms are great and the sound quality is there. I will use it often.

Fantastic, easy to use, beautiful sound

Another wonder from the Osterhouse brand

Osterhouse is impressing me with every new release. Each library of this brand is so well thought out, and always so beautifully performed. The musicianship and sound quality it really really up there. Plus the complex scripts make it really powerful

I love this instrument

SO much fun to play around with and create some interesting patterns and sounds, its very niche and boutique sounding, which is why i love it. absolutely worth the price

fun to use. great price.

Nice update. Works much better now in V2 and is pretty intuitive but a manual would help Only wish that 2 eighths and 1 quarter note were added to the rhythms for more flexibility but does the job well as it was intended and having some fun with it