Buy this product and earn
144 Credits
How can I use my Credits?

Cracklefield is an advanced generative sequencer for Kontakt featuring cellular multi-directional and interactive patterns which can create wonderfully unique musical phrases and rhythms.

Cracklefield is a unique, generative music machine, inspired by cellular automatons and early videogames. I wanted a sequencer where sequence elements could interact with each other, creating a dynamically evolving patterns. The sequencer in Cracklefield is using a grid, two-dimensional cellular space called the field.

The field can be read or modified by cursors, serving as a sequence track playing position.

In the basic sequencer you have several tracks, each having its own one dimensional space, which can be read forward or backward.

In Cracklefield all tracks are sharing the same two-dimensional space, each track being represented by a cursor. Cursors can travel in any direction, horizontally, vertically or diagonally, each at it's own rate. They can can be set to bounce off field edges or obstacles, here named 'walls'. The fun part is that cursors can bounce off each other.

Imagine several sequencer tracks playing 'pong' with each other.

It offers a new approach, thus far we had cursors travelling a static field, now we can have static cursors and a changing field. Different transformation modes can be sequenced and combined opening nearly endless range of new possibilities.

INSERT YOUR OWN SOUNDS

I decided to package it with a set of sounds that, most likely, nobody has already. 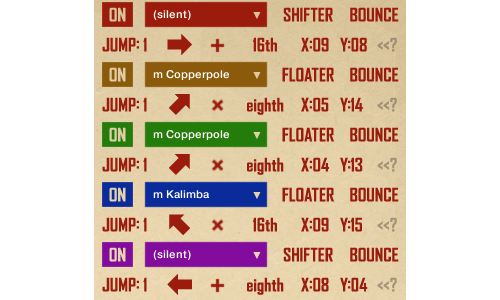 Cursors can interact with the field itself, paint, erase or flip cells, build or destroy walls. As well as shift whole field rows or columns. It's a playground for building evolving patterns.

Cracklefield can also use a mathematical phenomenon, named 'Langton's ant' to animate cursors. An ant is basically a cursor, which changes direction depending on what kind of cell it steps on. For example, it turns right on a filled cell and turns left on an empty cell, flipping the state of cell it has visited.

Sounds very simple, but the fascinating fact is, it creates surprisingly complex structures.

In Cracklefield you can combine several ants of different types to explore a variety of possible generative pattern setups. 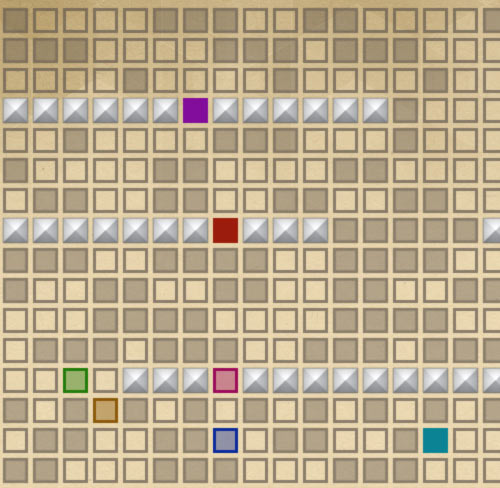 Cracklefield has a built-in note recorder, it allows the user to capture multichannel MIDI clips, which then can be exported to a DAW by drag'n'drop mechanism. 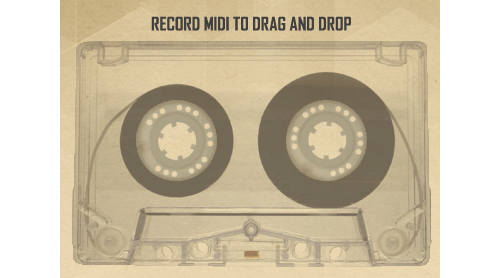 Crackelfield can assign presets to keyswitches or store them externally in nka files. Presets can be loaded seamlessly, without stopping the sequencer.

You can also filter which part of the setup to load. For example, only load different field content, or only change sounds.

It comes with 120 presets, to showcase some possible setup ideas. There's also a function creating random presets, which is a fun way to explore the instrument.

Each cursor can be bound to one of notes from the chord being currently held.

Arp patterns can modulated (transposed depending on cursor position), transposed and fit to a scale pattern, while each cursor can play a different sound.

The arp is great fun to tinker with. 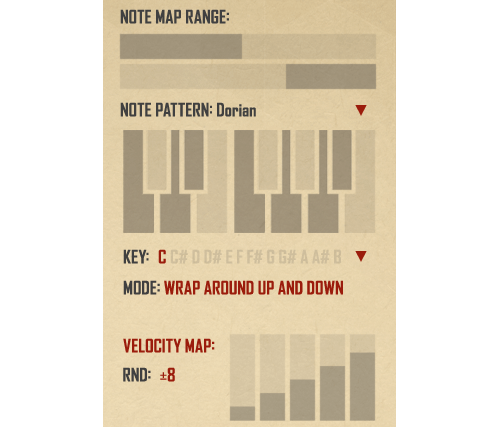 So far the best tool in this realm was Tone Carvers Nova 64, but I think Cracklefield has even wider uses. From very "normal" to totally crazy one can create arps and organic percussion very easily. The GUI is nicely laid out, the videos and helpfile explain the options well. It has great depth and is very versatile - highly recommended for everybody into partly and fully generative creations. Five Stars and a big "thank you!" from me :-)

a special league of its own

I have been toying with this for months, rewatching the videos and wondering, with my already vast collection of Arps and Sequencers, could this add any thing: well version 1.2 puts it right there and it has become 'what did I do without it' Kontakt library. It also may be used to run and other synths and shut itself up, when you become bored of its own sounds!

Totally unique and powerful. Love it.

An amazing sequencer. A little confussing at first but stick with it for some wonderful jump starts to your ideas. A unique riff generator, the onboard sounds are ok but it really sing when played though midi using your own sound libraries.

A truly mind boggling piece of programming that is equally intimidating and inspiring. It’s like playing Sim Earth with a hyper-intelligent A.I. that has a predilection for exotic musical modes. I’ve just barely scratched the surface here and, although I’m admittedly too stupid to understand it all, I can already tell this is EXACTLY my cup of tea. Generate riffs, entire songs, endlessly evolving melodies. The MIDI out feature is a godsend. Fire this puppy up and let it run all day!

This thing is nuts! If you're at all into generative music making, do yourselves a favour and buy this.

I have been waiting for this to fo on sale and I'm very happy to finally have it! After spending a few hours with this I know its going to be extremely useful. This dev will be getting more of my hard earned cash for sure

SzcZ is just a genius. All his instruments are so smart, useful, playful, and inspirational. Cracklefield doesn't break this rule.