Buy this product and earn
114 Credits
How can I use my Credits?

Sawmill is an instrument inspired by the supersaw sound. In a broad sense, it doesn't try to emulate the classic supersaw sound but I think it's interesting how layering detuned saw oscillators turns a static sound into a moving texture. I have been wondering how would it sound if you detuned other parameters, not just pitch. For example, you could also detune filters, LFO frequency, effects etc...

Welcome to Sawmill, where you can detune everything, on every oscillator.

There are seven oscillators and it is quite like having a stack of seven synthesizers, with controllers conveniently grouped by type. So if you want tune a filter cutoff you have a row of seven knobs to deal with. It makes it easy to experiment with oscillator layering.

Sawmill is not your standard sample library. It is an advanced and powerful synthesizer with sampled oscillators. There are 32 waveforms, generated mostly with a modular analog system and vintage analog synthesizers.

The samples are fairly long to capture bits of analog drift and tiny electronic imperfections which makes it sound more alive. Each sample has been looped by hand without any additional processing, to preserve as much of the original flavor as reasonably possible.

The waveform selection is focused mainly on different variations of saw, but it also includes other basic shapes, as well as some fancy waveforms you can generate in a modular by mangling the oscillator with rectifiers, ring modulators, inverters and the like, all in analog domain.

Additionally there are several innovative functions.

There is a sequenced modulator, which is a crossover between a step sequencer and an LFO - you can program a value pattern and shape it to the LFO waveform.

There are six patterns which can be combined and/or patched to different parameters, like pitch or filter cutoff. In fact, any parameter can be automated using MIDI CC.

There is pitch glide function with adjustable acceleration curve.

And then there is the advanced multi-arpeggiator, which is like having a stack of eight arpeggiators, which you can sequence or combine in different ways to create complex note patterns out of a simple chord. 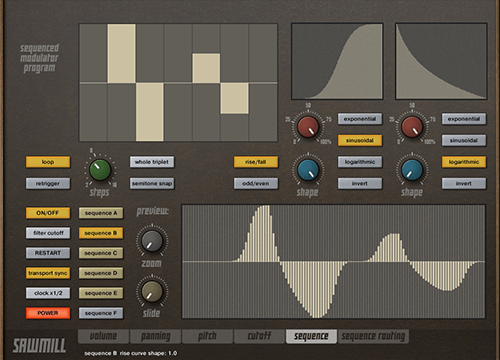 The instrument is equipped with 4 LFOs, 5 envelopes, a standard set of Kontakt’s effects (chorus, flanger, phaser, delay) and a full palette of Kontakt’s filters and different distortion types, all of which should by multiplied by 7, as each oscillator has a separate set.

There’s also an advanced multi-arpeggiator, which can run several patterns simultaneously and a rather unique step-sequenced modulator (a step sequencer, where you can define sweep curves between steps). In the end it can go well beyond the standard supersaw sound. 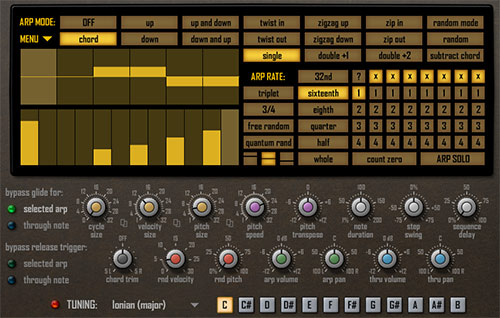 Modern analog – generated with eurorack modular system, based on Intellijel Dixie and Doepfer A-110-4 oscillators, first being triangle core and second sine based (sine waveform is not a derived from other waveforms by waveshaping). There are several saw flavors processed by different
filter types, where cutoff is modulated loosely by pitch CV. Besides regular shapes there are numerous exotic shapes, generated by mixing and
processing regular waveforms, using ring modulators, rectifiers, logic modules etc., all in analog domain.

Vintage analog – generated with Sequential Circuits Six-Track synthesizer, which has a neat feature of mixing three basic waveforms. There are three basic waveforms: saw, pulse and triangle and two mixed waveforms: saw + triangle and saw + pulse. There are also two versions of saw processed with tuned Moog type low pass filter. Tuned means that I used oscilloscope to manually tune the cutoff for each semitone, so the waveform shape is consistent over the whole set. This synthesizer is also the source of noise oscillator.

Vintage string machine – that’s a single pulse waveform recorded from1979’s Siel Orchestra, which had a solo mode being basically a single oscillator out. This set doesn’t cover the whole 84 semitones, lowest and highest octaves will be derived by pitching the samples in Kontakt.

Early mini clone – generated with eurorack oscillator, being the clone of early design of Minimoog model D using no integrated circuits. This set includes Mini’s trademark ‘sharktooth’ waveform and the only rectangle shape available (not exactly rectangle if you look at it).

The limitations in this version are:

So much from a saw!

Who could have realised that so much could come from a saw: well SzcZ has and after watching the very informative walkthrough video and leaving the manual open, I attempted to start a patch from scratch. Soon a sound of some interest came to and then more. The presets are great, especially to help you understand the possibilities and to get your head around the workings. Running Sawmill before another synth (recommend a limited keyrange) makes for a ready made, in sync, accompaniment. This is as much, if not more, fun as Loom II.

Thank you for Sawmil. It has a lot of possibilities. A little complicated to set up own sound but, when you understand it is nice. Ivan

More from this label View all